Reston Triathlon 2015.
*Did NOT train adequately through the summer for this race as my main goals were on running-- Annapolis 10 miler and the upcoming Marine Corps Marathon in 4 weeks!  I had been running plenty, but swimming was mostly limited to 10 min stints in the pool when the kids were on break/eating lunch and 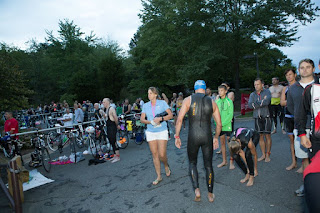 I would crank out some 100's, and my bike was unfortunately limited to about 4 experiences on my bike since Eagleman in early June!  PITIFUL!  (But wouldn't change it for the world- I had a great summer being completely present with the kids/ spending all the time I could with them.. and frankly learning to relax a bit more!)


*Race morning came and it was supposed to be a rainy and chilly morning.  I slept with windows open and was freezing all night.  My alarm went off at 3:45 and I got up and decided that I couldn't imagine myself going out in this cold weather into the lake.  That I didn't enjoy biking when freezing.... and I also didn't want to race in unsafe, wet conditions, etc.  I messaged a few people to please not think negatively about me for not going/ not being "in it" this year, etc.  And then i went to tell Ryan that it really wasn't going to happen for me this year since i wasn't going.  He asked why.  I proudly told him I just didn't want to.. (good for me, right, sticking up for what I WANT to do....)Good for me until he appeared baffled (or just sleepy) and I got my swimsuit/big girl pants on and arrived at the race.

*Biking from T2 to swim start in the cold dark had me again wondering what the hell i was doing.  I was literally convulsing with shaking/cold and my headlight kept going off/ moving around, so I held it, then it wasn't working/ too hard to brake, so I was essentially riding my bike in the dark with no light. fantastic.  yuck.  did not really want to do this race.

*And then I saw "my people."  Saw Michele, Meredith, Eric, John, Matthew, and others and it became FUN!  It was so great to stand around at the beginning with my people!  i softened and became happy!  Ryan and the kids came to watch the swim before heading to 8am church, and I was so thankful to have them there!

*The swim was about to start and I had "placed myself" in Wave 1-- not that my swim time is that fast, but I wanted to be in wave 1 because I finish at the top and don't like the bike being all passing and more dangerous, so I realize I put down a too fast for me swim time.. but I am committed to earning it when I do that and I go hard!  So I lined up with Eric at the beginning of Wave 1-- I was surprised more people were not right there ready 10 min beforehand... another reminder that this was a nice local, easygoing race!  We turned around for teh National Anthem and I was horrified as we stood there with our hands on our hearts and I saw a guy right next to me in his wetsuit with pee coming out of the ankle.  GROSE.  HE was about 1 foot uphill from me, so I did not take my eyes off the line of pee coming down.. DISGUSTING.. I have heard of people doing this before, but I just was astounded, disgusted, turned off, mad that it was during the National Anthem.... and then it kept continuing, and I really was grosed out.  I mentioned to Eric that some people are currently peeing so watch your feet and his eyes boggled out and he just said WOW in this way that was SO FUNNY to me/ and completely broke my tension and annoyance and I had a lovely laugh and I felt HAPPY again!  it was great!!!  And I felt less miserable and ready to begin!

*The swim began and i was on the extreme right side- great as we were doing a counterclockwise loop around the lake periphery and I prefer breathing right.  First 1-4 minutes in, I was having a hard time- I really believe that my wetsuit bothers me because I can feel it's line on my neck and I feel like I am being strangled.  But.. it is what it is. and i made myself go super slow for about 2 minutes so I didn't freak out, I worked on exhaling completely... and I really settled into a decent/doable pace and began picking it up as I got control of my breathing better/ didn't feel the constriction around my neck as much.  i felt strong and great and felt like my sighting was great.. But I also know that I have felt this way before and still came out slow as molasses.
*I exited the swim, looked down and I was in 28 min range and i was so thrilled to be under 30!  Still not fast, but honestly not bad and that was all I was looking for frankly!!!  In T1, I was putting helmet on and I saw Matthew running up the hill with his bike and I was so excited to see him, I yelled out for him and realized he had a great swim- he was in Wave 2 and passed me (wasn't at all surprised by this, but just thrilled to see him!!!) 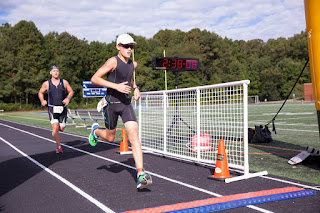 (this is matthew finishing to the left- 2nd in his age group!!)

*Got on my bike and began feeling great.  I was frankly worried about  my bike due to lack of training.  Biking is such m y strength and I somehow don't have to work too hard for it, but I also get very nervous at being unprepared at anything in life.  I always like to err on the early and prepared side of things!! But the bike was decent- of course not my fastest, but I still felt ok, was passing people and it was great.  During the bike, I saw Eric pass me around mile 20, I was so thrilled for him, he was hauling and I was so thrilled to see him so fast and strong and just darn proud.  I literally smiled for probably an entire mile just being so happy for him, and so happy that i was exactly where I was to see it!!!
*Entering T2, I saw John Schaller as a road volunteer and he was very good about yelling to me that I was 3rd place female at the time...and I knew he was trying to get this info to me, and i knew he was going to, and it was so nice to be able to trust another athlete who knows what it 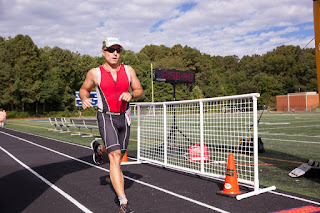 is like to have this important info given, etc!!
*I began the run and was happy to be on my feet.  I passed the #2 girl in front of me, but saw that she was actually in the wave behind me, so even though I passed her, she was still "faster".  Neither of us had even seen the #1 girl-- we said a few words back and forth like, "is she really up there/ we haven't seen her, etc".... But everyone was then telling me I was 2nd so I figured they knew what they were saying.  The run seemed to NEVER. EVER. EVER. END.  I know Reston so well, but these paths I don't know as well and it seemed to take forever to get to this part in the path.  I even asked a volunteer- is the turnaround soon?!!  I think the paths are so windy that you never really know where you are and you figure you must be there soon!  I did see the girl in front of me, but was hard to tell how far in front since I wasn't at the turnaround/ was waiting for it, etc!!!  Then as I turned around, I did see the #3 person behind me, as well as a girl really hauling along after that.  I committed to continue my focus.  Keeping my cadence up, my arm swing up, etc.  i knew I was getting tired, but I also knew people were kinda close!  I kept it up, actually feeling stronger for the last 2 miles of the run.  We hit the huge uphill before the track at the finish and I just kept feeling so thankful that I do hill repeats on that hill/ know it so well!  I entered the track, and same thing: I felt AT HOME on this track, so thankful that my body just KNOWS how much one final lap on the track will be to me!!!about 50 meters from the end though I heard heavy fast footsteps and a girls saying, "don't let me get you" and I was already going my fastest and couldn't keep her from passing me!  So I moved back in place, finishing in 4th woman overall and first in my age group!  I was happy with the placing, but also frankly just the race- that I had decided to DO IT!  that I was there for it and actually didn't feel too bad!  It ended up being a beautiful day to race- the post race party was FUN having so many people there that I knew! 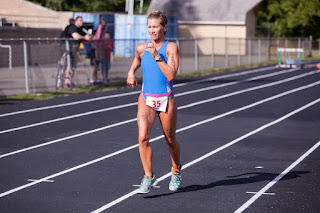 wow... I look..pained!!
SO: lesson that I took away from this day:
NEVER MAKE A DECISION ON RACE MORNING!  If you planned to race, go do it!  I am so thankful that I did!!  It is my last race until Marine Corps Marathon on 10/25, so now fully focused on running and only using swimming and biking as cross training!  If you did Reston TRIATHLON- WHAT WAS YOUR FAVORITE PART or your highlights!  (or lowlights- those are valid also-- my lowlight was the peeing guy).
Posted by sharon at 7:42 AM