EAGLEMAN 2017…
This was my 10th Eagleman!
Quick things I learned:
*ALWAYS bring a roll of extra TP.  Eagleman is always so prepared, but.. not this year.  An hour before the race started, one of the  main sections of port o pots ran out of TP.  An awesome lady in my line had an extra roll and handed like 10 sheets to everyone.  **she is my new best friend😊
*speaking of port o pots (and then I”ll be done with this subject)(for now… why is there so much bathroom talk in 70.3’s.)… I need to remind myself that there is no shame in getting out of one, and then walking immediately back to the line to stand in line again… bc… race morning jitters create immense havoc on  my system… (but the pepto bismol must have done the trick because it was fine after this!)
*wherever you go, there are gems:  met a woman before the race who was all talking herself up to me and ended with:  “I’ll see you at the finish, I’ll cheer for you.” (ughhhhh like she’s going to be done so far ahead of me and just lounging around cheering for me because I’m going to be so far behind her”??!!!  OK, so my competitive juices began flowing.

Race morning was awesome: woke up feeling great, got to race site, and literally parked like 50 feet from transition area- they opened up the field to parking—SO thankful- makes it so much better to not have to walk far with all of your stuff especially afterwards in heat/tired/etc.
AND… there is ALWAYS a beautiful sunrise at Eagleman.  Seriously.  I saw this and committed myself to doing this race FOREVER!!!  (more on that later). 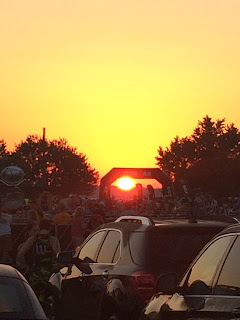 I just feel at HOME doing this race.  Sometimes I get on myself for not always doing NEW and different ones.. but I also like how I truly kind of feel at HOME here.  10 years and – I just know the ins and outs of the park, course, set up, etc.  I felt such gratitude for having that sense of “belonging” and feeling at home. 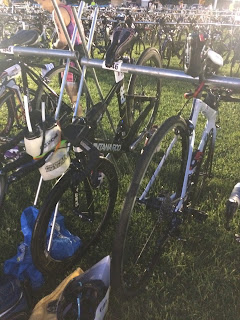 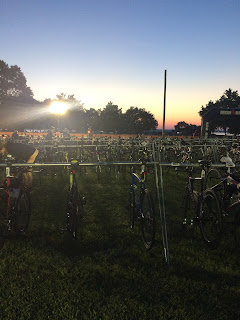 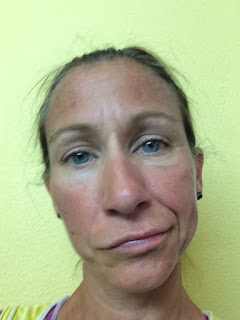 I was tempted to wait it out until they announced slot allocation and make sure I didn’t get the opportunity, but the longer I was there, the more I knew I didn’t want to wait possibly a total of 4 more hours until awards with most certainty that I wouldn’t get the slot.  I really didn’t want to stay in the heat, I really wanted to get my legs into a cold pool and then take a shower.  I felt confident leaving, and I did just that: left, headed to pool, shower, then walked around the cute little town of Easton, MD…. Then ran to target quick since I rarely get to really go through target and had a few things/cards/bandaids etc to get… and… it was in target that I got a txt from a friend who said they rolled to me for Worlds, do I want it.  Texted back: YES, have blank check and can be there in 20 min.  he said he’d run and ask. And…. I got the text that they had rolled to the next person.  AND I WAS (am) DEVASTATED.  I was in line at that point trying to get OUT so I can run back to Cambridge if it worked and when I got that text, I literally got goosebumps/lost my blood pressure/ felt dizzy/dreamy and just devastated.  I got teary in line, and left and sat outside target, calling ryan sobbing.
I know that on the scale of life, this is FINE.  But it was my goal and I worked every dang day for this goal and I really wanted it.  I feel dumb for not staying, lazily wasting away my day that ended up in my giving my spot away. (not really “my spot” since it rolled to me also)…. I’m so sad. So annoyed, mad, sad. Boo.